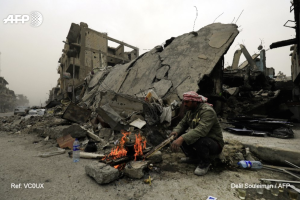 Emancipation US-style in Raqqa, Syria: the photojournalist who recently took this photo wrote favorably about US-coalition carpet bombing in October to “liberate” the city from ISIS fighters. Russia & Syria condemned the US-coalition for carpet bombing to “wipe Raqqa off the face of the earth” although in the past few years the city of over 220,000 people has sustained bombing by Syria, Russia, France, & the US coalition. The photojournalist argued that ISIS fighters had mined most of the buildings before their defeat. The question remains: who supplied them with those mines & how were they delivered to Raqqa?

Russia & Syria are now engaged in operations against revolutionary resistance in East Ghouta where they combine airstrikes to wipe the revolution off the face of the earth with a siege to starve the population, deny humanitarian aid, & prevent civilians from leaving.

That there is no international antiwar movement to stand with the Syrian people is one of the great tragedies & political crimes of this historic period. The only principled demand is for the immediate, unconditional withdrawal of all foreign military operations from Syria. Let the Assad dictatorship stand alone against the Syrian people & let them finish off tyranny.