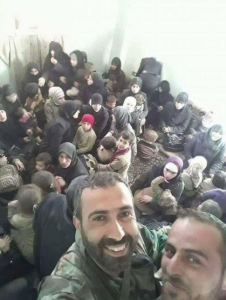 Assad propagandists are waxing triumphal about the Syrian army taking down Eastern Ghouta in a brutal siege that lasted 33 days. Well of course the forces of reaction defeated unarmed civilians. To do so, they used 1,578 ground missiles; 2,976 bomb strikes; 5,416 rocket launchers; 447 incendiary weapons, including napalm & white phosphorous; 8 toxic gas attacks, including with chlorine; unknown numbers of cluster bombs & bunker buster bombs; 7,013 artillery assaults with mortars & missiles. Over 1,400 civilians were killed, some burned to death by napalm & phosphorous, others suffocated by chlorine. The number of injuries are upwards of 6,000.

There are videos of Assad officials taunting survivors & forcing them to chant pro-Assad slogans in order to receive food & water. There are soldiers taking selfies with terrified women & children. But the propagandists are making this terrifying experience look like a festival of celebration by posting photos of soldiers holding little kids, helping the elderly, carrying the injured in their arms. It’s a glorification of militarism fully endorsed by the utterly corrupt antiwar movement.

This is a watershed moment in time, separating the wheat from the chaff: those who cheered on the slaughter of civilians & the destruction of the Syrian Arab Spring uprising & those who opposed it. The latter are in the majority, no matter the number of likes on social media cheering on slaughter. Most of those likes are Russian trolls. For so long, so many held out hopes that the measure of savagery by the Syrian regime would rouse its supporters from their political stupor rooted in Islamophobia & anti-Semitism & aligned with international fascist forces. But hope is now replaced with certainty that those who support the Assad regime, regardless of their confusions, have helped defeat one of the most important social, political, & revolutionary struggles of the past 100 years. May they rot in hell.

Stand with the Syrian people & demand the immediate cessation of Syrian, Russian, Turkish, & US coalition bombing & the immediate, unconditional withdrawal of all foreign military forces from Syria.