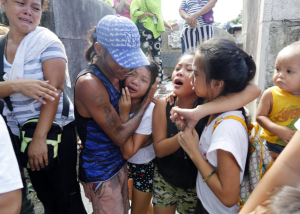 A Filipino official representing president Rodrigo Duterte announced on government radio yesterday that Duterte’s campaign of summary executions against illegal drug use has been a resounding success. According to his lying ass report, shooting down poor people on the street suspected as drug addicts or drug peddlers had cut the drug supply to the country by nearly 90-percent in just two months.

Figures released last Friday by the Philippine National Police claimed that the reduction in drug trafficking was accomplished by shooting down 1,466 people in police operations & another 1,490 by vigilante death squads unleashed by Duterte.

That’s a total of 2,956 people (there are likely many more unaccounted for) suspected of drug use & selling who never got to defend themselves in a court of law. Even if they were guilty as sin, every one of them had a right to due process. Everyone of one of them needed health care, rehab, housing, jobs–a life worth living.

Duterte represents the greatest danger to the Filipino people. The brutal repression he is introducing to applause in the long run is not going to be confined to small-time drug use but is intended to stop the growing political opposition to scorched earth neoliberal policies in the rural areas & cities & to the growing re-militarization of the country in collaboration with the US.

These young people are grieving a family member who was an alleged drug dealer executed on the street by police. If you support Duterte’s death squad policies for drug trafficking, explain to the rest of us how a small time drug peddler could possibly affect the traffic of drugs into the Philippines. To do that, Duterte would have to send those death squads against bankers, government officials, high-class business men he meets at the country club.

The historic imperative remains: to rebuild the international antiwar movement to end the reign of terror imposed by US militarism, of which Duterte is a part.