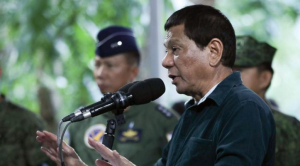 Philippine president Duterte gave a pep talk last Friday to soldiers at a military camp on Mindanao island where he imposed martial law last week to crush “ISIS-linked” forces. In what can only be considered incitement to rape, he “jokingly” said that if any of them were to rape three women, he would personally claim responsibility so as to give them impunity.

This isn’t the first time Duterte has found rape amusing. During his election campaign last year he talked about a 1989 prison riot in Davao city (where he was mayor) when an Australian missionary was killed & inmates lined up to rape her. In another one of those hateful misogynist jokes women are familiar with, he said the victim was beautiful & he should have been first in line.

Now we understand Duterte’s affinities with Trump & the affinity of Assadists with Duterte. We can also understand if some Filipinos might consider ISIS the lesser evil.

Photo is Duterte exhorting the soldiers to rape.

(Photo is Presidential Palace/Handout via Reuters)