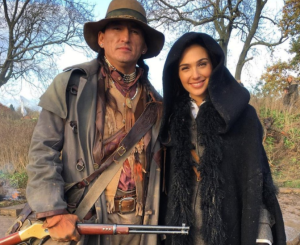 This is Eugene Brave Rock, a Native American actor from Canada who plays Chief, & Gal Gadot, the Israeli actress who plays Wonder Woman. Brave Rock was interviewed by Movie Pilot, an online movie industry magazine, discussing the authenticity of how Native Americans are portrayed in the film. The article cites praise for the film from Indian Country Today, an online newsletter about American Indians which claims over one million readers a month.

It isn’t necessarily some kind of Zionist campaign to plant stories countering the barrage of criticism because Gadot is a Zionist extremist who cheered on the carnage in Gaza. Indian Country Today is not the same journal that was founded in 1981 on the Pine Ridge Indian Reservation in South Dakota. Today it is operated out of NYC with an almost entirely white staff, some of them formerly prominent with Playboy magazine. It could be that the patriarchal, near-pornographic representation of Wonder Woman appeals to this journal who, if it has no Indian staff, probably doesn’t give a rat’s ass about the representation of Indians in the film.

Odds are the writers know exactly what the political issues are about this film. The primary political issue, other than the obtuse claim that this patriarchal Wonder Woman is a feminist icon, is that the actress supports the ethnic cleansing of the indigenous people of Palestine. If Brave Rock doesn’t know the relationship of Native American struggles to the Palestinian struggle, at least there are American Indians who do & have extended political solidarity with their struggle.

Brave Rock is of course right that there is a dearth of acting roles for Indians that are not shamefully racist & stereotyped. It’s still regrettable that his career will, even unwittingly, be built on the backs of Palestinians. Not to mention women.