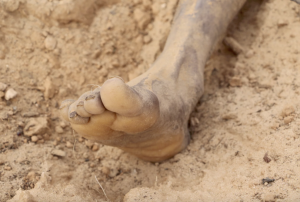 This is the body of an unknown African refugee on the beach at Sabratha, Libya where he was buried or maybe washed ashore from drowning. He will be buried in a “specially designated cemetery” without funereal ministrations or the grieving of those who loved him.

The US-Mexican border is also lined with such graves or mass graves where their bodies were dumped like trash. Beyond doubt, thousands of refugees’ bodies are buried, drowned, or lie exposed around the world as they set out from unbearable conditions to find a human life–the life that is their due.

Their deaths represent the epic failure of humanity to forge human solidarity against the strictures & rabidity of the nation-state. It is our historic mission yet to accomplish. Millions have already stood against the Muslim ban to say “an injury to one is an injury to all”–which is the iron law of social transformation.

We should take a moment to pay tribute to these unknown refugees who were not strangers but in fact our own. When our protests are scorned & mocked because we haven’t protested every war for the last 100 years, we only need think of this young man & countless others. We will be part of changing history in their honor for the life & dignity they were denied & that no other sustain death without mourning. May they Rest In Peace.