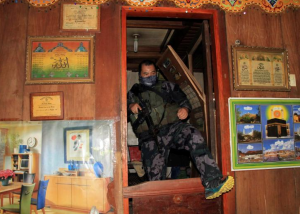 Without missing a beat, Reuters news agency transitioned from relatively honest coverage of Duterte’s death squad war against the poor in Manila to inflammatory, Islamophobic reporting about the imposition of martial law & the war against ‘ISIS jihadis’ in Marawi City on Mindanao Island.

There’s no need for Reuters to send reporters to Marawi City. They only need repeat the canned description we know so well from Assadist reporting on Syria: Islamist rebels armed to the teeth with mortars & automatic rifles are engaged in kidnapping, sexual slavery, using civilians as human shields, even head-chopping. And, of course, Wahhabism is their creed.

One disturbing aspect in the reporting is the role of Catholic Church officials in the region who claim ISIS fighters are using Christians, even a priest, as human shields. Bishops & cardinals “urged Islamic leaders to persuade militants to free innocent hostages.” Now why would Catholic prelates give credence to the Islamophobic claim that ISIS fighters have connections to Muslims? Perhaps we need to inquire exactly what Trump discussed with Pope Francis on his recent visit to the Vatican.

It’s also being reported that US soldiers are operating in the area. How many are there? What are they doing? Why are they there? And while we’re at it, where are the ISIS fighters getting their weapons? How are they being transported to Mindanao Island?
What makes the reporting on Duterte’s war against ISIS so grotesque is that Marawi City, the heart of this conflict, is only 178 km (111 mi) from Davao City where Duterte was mayor for 23 years & in that time executed thousands of people with death squads, used forcible disappearance & buried the victims in mass graves.

This photo is a Filipino soldier on a house invasion in Marawi City. Looking for what? Jihadis hiding in the closets, like the Indian army claims in Kashmir? Weapons that the Philippine navy couldn’t intercept on the sea or the air force prevent from being airdropped? Are they bringing in mortars & high-powered rifles hidden in produce?

Shame on those who claim Duterte is being demonized to set the stage for an imaginary regime change operation. They’re the same people who support Assad & the Maduro regime in Venezuela. If anyone gets confused about what to believe, stand with the civilians being executed & forced to flee their homes in terror. You’ll be starring down the barrel of a gun wielded by the oppressor.