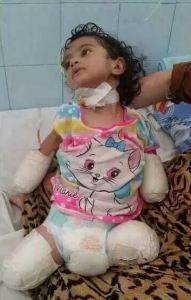 The antiwar movement (such as it is) refuses to condemn or protest Syrian & Russian bombing of civilians claiming it is to take out US-backed terrorists trying to overthrow Assad’s national sovereignty. Many who oppose Syrian & Russian bombing call on the US to militarily oppose Syria & Russia whilst the US is engaged in massive bombing of civilians in Syria claiming it is to take out ISIS. No wonder so many are confused by the monstrous crimes being committed against the Syrian people.

This child is the consequence of such stinking rotten criminal politics.

The only principled antiwar demand is the end of all foreign intervention in Syria, including Russia, the US coalition, Iran, Hezbollah, & the rest of the counter-revolution. Out now!