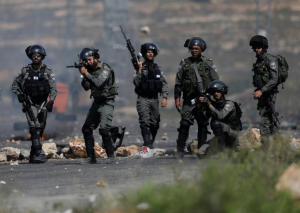 May 15th is Naqba (Catastrophe) Day commemorating 69 years since 780,000 Palestinians were forcibly driven from their homeland by Zionist paramilitary terrorist squads under the protection of the British. Over 500 Palestinian villages were depopulated & destroyed.

Palestinians have never reconciled themselves to the violent dispossession & proclamation of a state of Israel in their stead. More than 7 million Palestinian refugees, one of the largest refugee communities in the world, continue to live in refugee camps in Gaza, the West Bank, Jordan, Lebanon, & Syria. The West Bank, East Jerusalem, & Gaza with a combined population of nearly 5 million Palestinians have been under military occupation since 1967. Gaza is under an Israeli blockade making it what is called “the world’s largest open air prison” & has sustained several sieges of Israeli carpet bombing along with periodic bombing sorties to keep them in a state of terror.

Those who oppose the misanthropic & dystopian Zionist vision of a Jewish-only state do so because it is based on colonialism & the ethnic cleansing of Palestinians–& because it is a rightwing nationalist & supremacist pipe dream that persecution of Jews can be ended by rejecting the broader struggles against racism & colonialism & instead joining with colonial forces.

This photo from May 11th is Israeli occupying forces near the West Bank city of Ramallah & the Zionist settlement of Beit El aiming deadly weapons at Palestinians protesting in support of Palestinian political prisoners on hunger strike. This may not be the vision supremacist Zionist ideologues had in mind. This will remain the reality until Palestinian demands for self-determination are realized in a democratic, secular state where Palestinians & Jews can live as brothers & sisters.

To commemorate the 69th anniversary of the Nakba, join the campaign for Palestinian justice:
–support the Boycott, Divestment, & Sanctions (BDS) movement against Israel & boycott all Israeli products (barcode beginning 729) & support the cultural boycott;
–support the right of return for all Palestinian refugees;
–demand the end of the military occupation & the end of the siege of Gaza;
–demand no military or settlement aid to Israel.