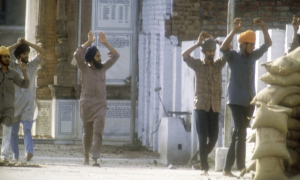 Were it not for social media, most of us would know very little about each other & even less about persecutions & freedom struggles around the world. Detachment, insularity, alienation, & mostly prejudice would still prevail were social media not such a powerful tool for forging respect & bonds of solidarity against injustice. It’s certain that most of us in the US know nothing about Sikhs. But their humanitarian aid teams to Rohingya refugees through Khalsa Aid has made them admired by many. Twitter was filled today with commemorations & demands for justice for the anti-Sikh pogroms instigated by the Indian government in revenge for the assassination of Indira Gandhi on October 31, 1984. Today marks 33 years since Sikhs were massacred all over India, including thousands killed, women raped, children beheaded.

In respect for Sikhs & to support their demand for justice, these are random articles garnered from Twitter so that we may inform ourselves about who they are, why they were slaughtered, & how we can stand with them in pursuing justice. Persecution, pogroms, genocides have long memories filled with griefs not solaced until justice is addressed.:

Photo is Sikhs surrendering to the Indian army in 1984 in Amritsar.