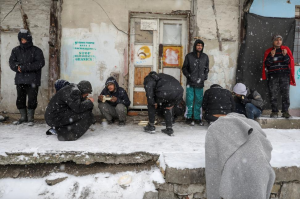 If you listen to the vituperations of politicians & emboldened nationalists & fascists against allowing refugees to enter Europe or the US, the highest traditions of human civilization are imperiled by the hordes of mostly Muslim war refugees. There are almost certainly terrorists hiding among them, maybe even the head-chopping kind. But even if there aren’t any terrorists camouflaged as war-traumatized refugees, allowing so many Muslims to enter with their hijabs & their conservative ways would threaten cultural monotony & create social havoc. Hasn’t multiculturalism made enough of a mess without the Muslims?

It would be useful if they would elaborate those highest traditions of human civilization. Do they mean the US-NATO wars & massive bombing creating all the refugees? The multinational looting that dispossesses & makes millions desperate enough to flee to another continent? The civilized politics that lets thousands drown or live outside in the freezing cold?

This group of refugees eating al fresco in a snow storm at sub-zero temperatures (-20 C / -4 F) are part of 7,000 Afghan, Iraqi, & Syrian refugees in Belgrade, Serbia, hoping to be allowed entrance to Hungary which is 2-1/2 hours away by car; they’re all on foot. Hungary doesn’t want them & long ago made that quite clear by building a razor wire fence with heat-sensitive cameras, surveillance helicopters, patrolled by thousands of soldiers.

There are some refugee tent camps near Belgrade & the UN refugee agency is there handing out blankets & counting. Counting seems to be its highest mission in life & it can’t even get that right since there aren’t enough tents. The camps are so overcrowded that only women & children can get in & men are forced to live & sleep al fresco or in abandoned warehouses that are likely filthy rat-infested fire traps.

Médecins Sans Frontières/Doctors Without Borders personnel are there to provide medical care–those are the very doctors Assadists are now campaigning against as stooges for US-NATO. The doctors say a lot of what they’re treating are respiratory infections like sinusitis & bronchitis: runny noses, phlegm, sore throat, upper chest pain, burning sinuses. It must be a living hell.

The highest traditions of human civilization include asylum for refugees, not this kind of barbarism.

Immigration is a human right. Asylum is an obligation. Open the damn borders.