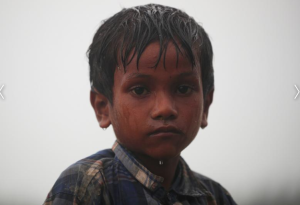 Nur Kabir, a 5-year-old Rohingya refugee caught in the rain as he waits to cross into Bangladesh.

Most sources claim 600,000 Rohingya have sought asylum in Bangladesh since the current genocidal offensive began on August 25th; the UNHC reported it was closer to 800,000 streaming into refugee camps without an infrastructure to accommodate them nor apparently sufficient housing, food, healthcare.

The Red Cross & UN are reporting that a cholera epidemic at Cox’s Bazar is a looming risk because of “poor sanitation & lack of hygiene facilities” by which they mean no aid organizations have prioritized port-a-potties so people living in overcrowded conditions don’t have to poop on the walkways. It’s elementary to avoiding the spread of contagious diseases, including cholera, but we know that in the 2010 Haitian earthquake the hundreds of thousands made homeless were never provided sufficient toilets which made them sitting ducks for the cholera outbreak brought by UN troops.

In response to the threat of cholera at Cox’s Bazar, the UN began a massive vaccination campaign but the threat of an epidemic is not reduced an iota if there is no system of port-a-potties & sanitation maintenance. Like always, the Red Cross is using the Rohingya crisis to raise money but its financial practices are coming under scrutiny since it raised half a billion dollars for Haitian relief & had only six houses to show for it. Now the Red Cross can’t account for over $6 million in funds directed to fight the 2014-16 Ebola epidemic in West Africa.

The situation at Cox’s Bazar is not unlike the situation in Gaza where Israel has systematically destroyed the sanitation system & endangered the health of Palestinians as part of its program of ethnic cleansing. We need to get a clear idea of what is needed by refugees at Cox’s Bazar & then begin applying political pressure on our governments & humanitarian aid agencies to deliver port-a-potties & a sanitation system which are the first line of defense against epidemic.