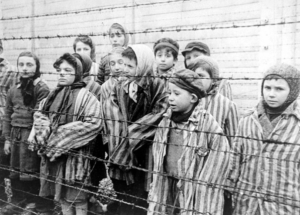 We often note that children are not accidentally harmed, disfigured, disabled, or killed in war, occupation & genocide but are directly targeted. That was as true in Nazi Germany as it is in Syria, Afghanistan, Iraq, Palestine, Kashmir, Burma, & elsewhere. It’s politically of the essence that we analyze & highlight this violence against children & do not allow the narrative to be controlled by the forces of oppression. Challenging the official lies is made possible by social media in a way not possible in the 1940s. When the super-power combatants of WWII in collusion with Zionist forces controlled the narrative about the genocide of Jews, it justified colonizing Palestine & the ethnic cleansing of Palestinians.

Jewish, Roma, Polish, & disabled children suffered in the most unspeakable ways under German fascism. It’s regrettable become criminal that Zionism & its super-power allies continue to cynically manipulate that suffering to justify Israeli crimes against Palestinian children. If they respected the legacy of those children, they would be unable to reproduce the violence against Palestinian children.
Wikipedia is a questionable source of information regarding Muslims & of course Palestine but this entry on children in the holocaust is quite valuable but also horrifying:

We should take a moment to remember & honor the up to two million children, Jewish & non-Jewish, who died under German fascism.