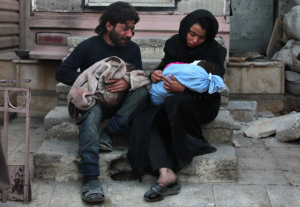 This Syrian couple mourn the death of their child Amir who was killed in Russian carpet bombing of the town of Saqba in eastern Ghouta. Do you think this young mother & father agree with, or at least understand the position of the debased antiwar movement which claims bombing of civilians is necessary to defend Assad’s national sovereignty? Do you think their misgivings about such rancid politics will be overcome when debased socialists throw those quotes from Lenin at them? Or when they blame this carnage on Israel & US regime-change schemes?

Our deepest condolences to this young couple & to all civilians suffering because the antiwar movement has been coopted by political degenerates & is led by comfortably ‘retired’ CIA & FBI agents & military officers.

The only principled demands are that Syria, Russia, & the US-coalition stop bombing civilians & for the immediate, unconditional withdrawal of all foreign military forces from Syria.