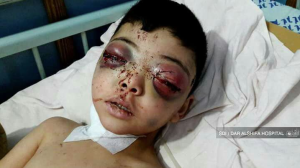 Assad propagandists Vanessa Beeley, Eva Bartlett, & Tim Anderson are up in arms that the Guardian will not allow them to take over the paper to rebut the exposé of their connections to Putin & Assad titled “How Syria’s White Helmets became victims of an online propaganda machine” by Olivia Solon. Maybe they can work out a reciprocal agreement between the Guardian & RT allowing the White Helmets to take over RT & rebut all the lies told there about them & the Syrian revolution, especially the head-chopper stuff.

Beeley is in Syria right now, embedded like always up the ass of the Syrian army & trying to deny the carnage of Syrian & Russian bombing of civilians in Idlib & eastern Ghouta. How does she explain this? This is 6-year-old Oyis Al-Taki at Dar Al Shifa Hospital. The little guy suffered massive head injuries & extensive damage to both eyes from Russian bombing in Ghouta. He was likely pulled out of rubble by a White Helmet rescue worker. A White Helmet rescue worker going about the business of the CIA? Get real.