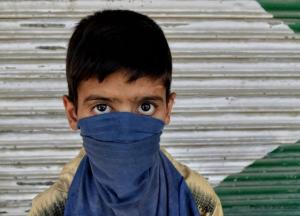 There’s a tragedy here when young boys & teens have to be among those defending religious freedom against an occupying army. India is doing the same thing at Jamia Masjid in Srinagar as Israel is doing at Al Aqsa mosque in East Jerusalem. Both occupying armies focus on disrupting Friday prayers. But of course those mosques are not the only places they cause disruptions because torching mosques & religious places are also long part of their attempts to challenge religious freedom.

It’s isn’t delinquency for youth like this small boy to resist such provocations & defend Friday prayers. Since when does the criminal element defend religious freedom?