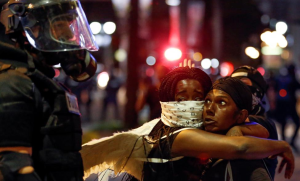 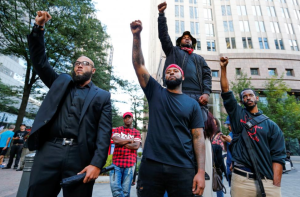 The Charlotte, North Caroline police department offers a different version of the fatal shooting of 43-year-old Keith Lamont Scott than his family does. The police claim they mistook Scott for a wanted man they were hunting & gave him clear warnings to drop a handgun before they shot him down. Is this trigger-happy stuff standard police procedure?

The family say that Scott who had a disability, was sitting in his car reading & waiting for his child to get off the bus & that he had no gun.

Coming just days after the police shooting of unarmed 40-year-old Terence Crutcher in Tulsa, Oklahoma & 13-year-old Tyre King in Columbus, Ohio, is overwhelming evidence that despite all the media exposure & public protests, the war against the Black community continues. It has gone on for decades, not unlike a military occupation.

It will not end without a massive committed movement that grabs hold & will not let go & will not be compromised. Independent Black political power is a threat to the status quo because racism is integral to how the system works economically & ideologically. The police are only the front lines of this assault which goes all the way to the highest levels of power in this country.

Adolph L. Reed, Jr., a prominent Black academic who has a fetish against identity politics, recently published a statistical song & dance claiming the violence against the Black community has diminished over the past several years. His research is less statistical than it is tendentious. Other researchers without an axe to grind have demonstrated beyond dispute that the war on the Black community has often been a martial law situation with rampant violations of the Bill of Rights; frequent shootings of unarmed young people under the guise of the war on drugs; constant harassment; & massive incarceration of Black youth for minor infractions.

These are protesters against the police shooting of Keith Scott in Charlotte, NC. We stand in complete solidarity with them. Solidarity is the iron law of social transformation. The eventual elimination of racism as a political force depends upon it & is not deterred by phony statistical apologetics.