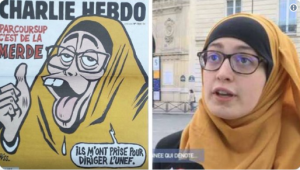 Are people actually still debating Charlie Hebdo’s satiric excesses? After they mocked the drowning death of 3-year-old Syrian refugee Alan Kurdi? After they portrayed him as a grownup sex molester? After they portrayed boatloads of African refugees as monkeys? After all the Islamophobic cartoons like this one mocking a 19-year-old Muslim woman as a monkey? Sarcasm in the hands of the oppressed is to change the balance of power to the advantage of the powerless. In the hands of the privileged elite, it is nothing more than supremacist ridicule & abuse. Charlie Hebdo isn’t amusing, isn’t incisive social commentary, & it’s not worth much cartoon-wise. It isn’t satire. It’s nihilism, the philosophy of fascism. Is Charlie Hebdo fascist? Perhaps they haven’t gone that far yet but they’re moving in that direction, already skirting the parameters with their arrant racism, xenophobia, white supremacy, Islamophobia. Even tasteless hate-mongering has the protection of free speech laws. But it’s a pointless waste of time to debate whether this rubbish is satire when the only ones it speaks for are fascists.