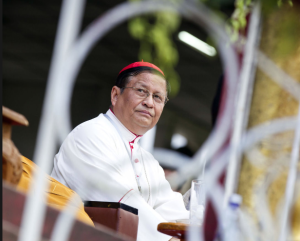 This is one of those things you’re almost ashamed to report because the cynicism & corruption involved are as low as it goes. Yesterday, the National League for Democracy (NLD), the party of Aung San Suu Kyi which fronts for the military junta, held an interfaith prayer rally in a Yangon soccer stadium to pray for peace & religious harmony in Burma. Twenty-thousand Christians, Muslims, Hindus, Buddhists, all sitting apart, lit candles & held up photos of Suu Kyi while they were addressed by religious leaders from each religion in a city which is over 90-percent Buddhist. All this whilst the Burmese army continues to torch entire villages, starve out Rohingya villagers, & hunt down those fleeing like they were animals. It is estimated that 5,000 Rohingya flee for their lives every day.

There are photos from the prayer rally of Christian nuns, Hindus, politicians, supporters of the NLD. There is also this photo of Cardinal Charles Bo, the Catholic Archbishop of Yangon, attending the rally. Were they there willingly? Were they coerced or rewarded in some way for attending? How can Pope Francis who protested (though not loudly enough) the genocide of the Rohingya allow his representative & one of the highest officials of the Catholic Church to be a party to whitewashing genocide? Unfortunately, it is not unlike the conduct of Cardinal Mario Zenari, the papal envoy to Syria, who collaborates with the Assad regime. The Catholic Church cannot play both sides of the street in a genocide anymore than it can in a revolution against dictatorship.

If Cardinal Bo feared for his life if he did not attend with an entourage of nuns & priests, then the moral, principled, decent thing to do was to take an airplane to the Vatican & denounce the genocide from the papal balcony in St. Peter’s Square. He can’t pull that schtick that Suu Kyi did for so long that speaking out against the genocide was too risky. If you don’t speak out against it, you are directly in collusion with it. Or what’s the point of being a religious leader?