So glad these retired FBI & CIA agents & military officials leading the US antiwar movement & Hands Off Syria Coalition have become such ardent civil libertarians, banging on about the new McCarthyism. Maybe they’ll come clean now about what they did before their miraculous transubstantiation.

Never was there such a clamor for national sovereignty from both the libertarian left & the right. Suu Kyi & the generals rail about it to prevent any investigation into crimes against the Rohingya; Assad & his coterie of apologists consider it the coup de grace for their defense of counter-revolution; Modi wields it to justify 700,000 soldiers occupying & brutalizing Kashmir; anti-immigration & anti-refugee nationalists & supremacists tout it as the be-all & end-all for keeping Europe & America white (no one claimed you had to be smart to be racist).

Now some libertarian left guy says “National sovereignty is an undervalued asset in today’s world, especially in the international media, where the views of Washington & its allies largely prevail.” If they could get over their hang-up about reading mainstream media they would know about Suu Kyi, Modi, Assad, & the other nationalist idiots & even learn about the Trump wall on the southern US border. Isn’t that all about national sovereignty?

Sweatshop economics, which is the neoliberal way of doing business, cannot exist by respecting national sovereignty. So if they can move money around, invest in mining, agribusiness, plunder all over the globe, why can’t those who are dispossessed have unfettered access to go where they can earn a living & make a better life? 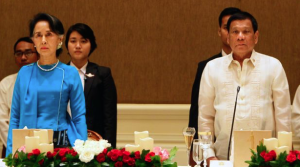 Now this is a political relationship that makes perfect sense, an alliance fermented in the bowels of hell: Philippine president Duterte, conducting a death squad war against the poor, & Aung San Suu Kyi, conducting a genocidal war against Rohingya Muslims.

Duterte is on a state visit to Myanmar. Which is interesting since Myanmar is a leading player in the illegal drug trade, particularly in the trafficking of methamphetamines which are destroying the lives of so many Filipinos. Most of the meth trafficked to the Philippines comes from China. So is Duterte looking to get a better deal from Myanmar? Or are they discussing methods for exterminating human life?

It didn’t take Suu Kyi long to respond to the UN Human Rights Council which last Friday voted to urgently dispatch an independent monitoring team to Arakan state to investigate charges of mass killings, mass rapes, & other monstrous crimes against the Rohingya. Her office rejected the possibility of such an investigation saying it “would do more to inflame, rather than resolve issues at this time.” Inflame who? The generals & their Buddhist henchmen?

Just to make sure Suu Kyi was understood & could continue to play soft cop to his hard cop for genocide, the Myanmar military chief Min Aung Hlaing, who really runs the country, gave a speech warning the UN against interfering in the country & rejecting the possibility of a UN investigation. “We have already let the world know that we don’t have Rohingya in our country,” he said. “Bengalis in Rakhine state are not Myanmar citizens & they are just people who come & stay in the country,”

Some sources are speculating whether it’s possible for the UN investigation to proceed without Myanmar’s cooperation. What’s stopping them from interviewing the 75,000 Rohingya refugees who fled genocide just since October 2016? What about reviewing the satellite images from Human Rights Watch of entire villages torched by the Burmese army? Or the hundreds of videos of crimes being committed against Rohingya by soldiers? Do they have to look at incinerated villages & count the bodies in Arakan state to document genocide? Why the hell do they think 75,000 traumatized people left their own country to live in squalid refugee camps under threat of being deported to an uninhabitable island by Bangladesh?

Tomorrow marks the first year of Suu Kyi’s tenure as State Councillor. Just one year to make an about-face from human rights superstar to racist, nationalist defender of genocide. Given that the human rights thing was always a fraud, the fall from grace for Suu Kyi was a seamless transition.

CBS morning news is reporting that Trump’s border wall will divide an upscale retirement community on the US-Mexican border & interfere with their golf course. They intend to litigate.

Pardon me if I don’t give a rat’s ass about their golf course if they don’t express even a single concern for the thousands of refugees whose lives will be endangered by that wall.

There may be a method to the madness of letting Trump–who is clearly treasonous, incompetent, financially compromised, & psychologically fragmenting–function as president for several months. He is signing one executive order after another reversing decades of social protections & accelerating the process of neoliberal scorched earth economics like the destruction of public education, environmental protections, & civil liberties.

They can form a commission to take him out any time they want; they already have the goods on him. But he serves an invaluable service that Clinton could not have, given her populist rhetoric. We will be forced to go back to the 1960s & refight all those battles all over again. Bring it on. We do what we have to.

Do you think Ivanka Trump is really running the White House now? Or is she there to prevent Trump from decomposing before our eyes? Don’t you wish you’d voted for me now? I don’t have the style but I have all my marbles.

This is one of the Kashmiri protesters who, at risk to their own safety & lives, rushed to the scene of the Chadoora encounter early today to interrupt the occupying army from its shootout against a lone rebel & to rescue him from being harmed.

We should take a moment to pay tribute to them. They are made of the same steely courage as the White Helmets in Syria, as Palestinians terrorized by Israeli troops & violent settlers, as the protesters who showed such remarkable courage against superior military might in the Arab uprisings.

So many look at the overwhelming suffering in the world & draw misanthropic conclusions that humanity isn’t worth a damn. These are the fighters who still believe justice & freedom stand a chance & put their lives on the line to be part of achieving that.

Indian nationalist media called them trouble-makers & spoke of their “criminal impudence” & “thuggery.” Would that the human race had more such impudent & fearless trouble-makers. These are the teachers of revolution against tyranny, the leaders of social transformation. 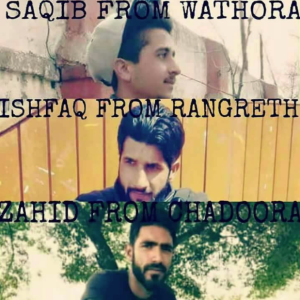 This montage is the three young Kashmiri men shot dead today by occupying forces for trying to interrupt an encounter against an unidentified militant, for risking their lives to stand in solidarity with another.

Our deepest respect for their contribution, the ultimate sacrifice, to human freedom. We will keep them in our hearts to strengthen the fight against occupation, war, genocide, colonialism.

May they Rest In Peace:

“As Tacitus long ago said about belligerent armies, “They plunder, they slaughter, and they steal: this they falsely name Empire, and where they make a wasteland, they call it peace.””

There was another brutal encounter that began in the wee hours this morning between Indian occupying forces & Kashmiri freedom fighters in Chadoora town, about 15 miles / 25 km south of Srinagar.

It began with a military search & summary execution mission after a tip-off to India’s snitch & surveillance network of the presence of a militant in the area. As soldiers & special forces began shooting up a house where they thought he was hiding, protesters from the nearby areas chanting anti-India slogans began converging to interrupt what Indian nationalist media is calling a “gunfight.” It isn’t a gunfight when it’s one guy with or without a weapon against a squadron of special forces. That is a massacre.

The protesters were absolutely justified in trying to protect their fellow from being murdered & to help him escape. Even if he were guilty of serious crimes, this kind of operation is designed to execute him on the spot without even knowing who he is or whether he’s guilty of anything.

When it was over, the unidentified militant was dead along with three young protesters & 28 people were injured. Indian security forces stopped the ambulance carrying the body of one of the victims & prevented it from moving. The encounter ended with Indian forces razing the home to the ground by shelling it & with improvised explosive devices (IEDs). They claimed they found one weapon. For all we know, it could have been a sling shot.

The three young protesters killed, all in their 20s, were Zahid Rashid, Qaiser Ahmed Ganai, & Ishfaq Rashid.The name of the alleged militant is not yet known. May they all Rest In Peace. They died as martyrs. Our sincere condolences to their family & friends. Our highest esteem for the protesters who stood to defend them.

This is some of the protesters standing against the occupying army.