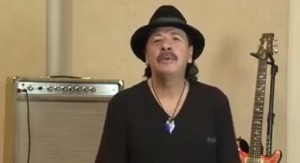 Carlos Santana is a weasel & not just a garden variety kind of weasel but the kind that tries to portray himself as a deep-thinking poet & man of the people. He can sling that hippy peace & love crap so ardently one could call him the Deepak Chopra of Israeli apartheid.

Despite months of campaigning by BDS activists trying to educate his bony ass & asking him to honor the cultural boycott of Israel, he is proceeding with his July 30th concert in Tel Aviv. He actually had the gall to post a video message on Thursday saying he’s excited to return to Israel to promote a “musical message of peace, love & an end to conflict.” In street parlance, that’s known as a crock of you-know-what.

Last Tuesday, the anti-Zionist group Jewish Voice for Peace tried to deliver a petition with 25,000 signatures to the headquarters of The Milagro Foundation set up by Santana for underprivileged kids around the world. Workers at the foundation “refused to open the door…& closed the blinds,” according to the Middle East Children’s Alliance (MECA). How weasely do you get!?

While the poet of apartheid does his schtick, our mission is to build BDS, the economic, cultural, & academic boycott of Israel. As for Santana, he can stick his poetry where the sun don’t shine.