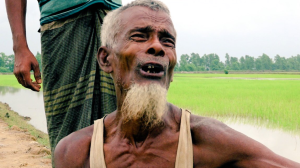 The general said the military won’t be easing off its campaign against the Rohingya because it was “unfinished business” dating back to World War II. He referred to conflict in Arakan in 1942 between the Rohingya who sided with retreating British forces & Buddhists who were allies of the Japanese. Lying through his ass, he claimed tens of thousands died “in a failed attempt to create a Rohingya state.” In fact, it was a pogrom against the Rohingya.

This man named Nurul Huq survived a massacre in the village of Tolatuli but lost seven daughters & witnessed an entire village put to death by hacking, shooting, & burning. This is genocide & has absolutely nothing to do with ARSA insurgents, a small band armed only with knives & spears, if they even exist.