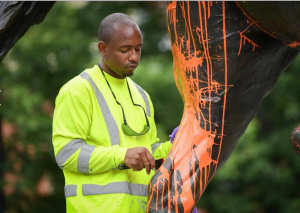 The thing we have to come to grips with to establish grounds for impeachment–or even better, a revolution–is that with Trump, there are no new lows. In his press conference today, he reiterated his defense of the fascists & white supremacists in Charlottesville; accused the young woman killed & those injured when the fascist drove into them of provocation & charging the car with clubs; & blamed both fascists & counter-protesters equally rather than condemn the racist violence.

The fascists showed up in Charlottesville to protest the removal of a statue of Confederate general Robert E. Lee. When reporters queried Trump on the issue, he pointed out that George Washington & Thomas Jefferson were both slave owners & said: “This week it’s Robert E. Lee. I noticed that Stonewall Jackson’s coming down. I wonder, is it George Washington next week? Is it Thomas Jefferson the week after?….Are you gonna take down their statues too?”

Whether Americans tear down those ugly-assed monuments to Washington & Jefferson & all the other founding fathers who were slavers is secondary to the falsification of US history in public schools which completely omits or whitewashes (there is no more apt term) the history of slavery, the extermination of millions of Native Americans, & denies the contributions of Blacks, Indians, Latinos, Chinese, & other nationalities to US history & culture. As a matter of fact, there is no more contemptible whitewash than the history of Thomas Jefferson who held a woman slave as his concubine for years beginning when she was 14 & he was 44. Historians have turned this rape into a love story.

Most of the hundreds of Confederate & racist monuments across the US are not a part of US culture & history as dumb-assed Trump claimed. They are of fairly recent vintage, installed by unreconstructed Confederates to create lies about our history & make heroes of white supremacists. If truth be told, all of the Confederate monuments should be razed to the ground & destroyed. There shouldn’t be a single objection either to taking down the statues of the founding fathers who were slavers & replacing them with monuments to the Black, Latino, Indian, Chinese, & other working people who have built this country despite the persecutions they sustained. That is not to create deception about the past but correcting the lies & teaching our children what & who is worthy of honor & respect.

A useful popular history to read on the Confederate monuments is “Lies Across America: What Our Historic Sites Get Wrong” by James W. Loewen. He also wrote “Lies My Teacher Told Me: Everything Your American History Textbook Got Wrong” about the falsification of US history leaving out Blacks, Latinos, Native Americans.

This photo is a city worker in Louisville, Kentucky who is obviously resentful at being assigned to remove paint from a vandalized monument dedicated to a Confederate soldier.