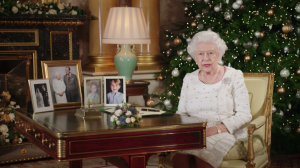 My annual commentary on Betty Windsor’s Christmas address will necessarily be brief this year due to the sheer volume of banalities she shoveled into her annual five-minute homily to the nation. The 2017 address was a sustained meditation on home & family. It’s no small feat to render a cliché profound but our Betty did her best. Which unfortunately was not good enough.

She spoke warmly of her children, who she referred to by their titles. She spoke most affectionately of Phil’s “unique sense of humor”–a wit so brim full of racism, misogyny, & idiocy that it has nearly brought the Commonwealth to collapse on more than one occasion. She said after 70 years of marriage & in his nineties, Phil has now found it time to slow down. At full speed, it was never clear if Phil was alive or just a masterpiece of taxidermy rolled out for pomp & circumstance. But that’s another matter. She also spoke warmly of Commonwealth leaders for their “inspiring way of bringing people together,” not realizing that the cheering throngs that greet her titled kids are unemployed & prison inmates forced under compulsion of execution to act the serf. Except Justin Trudeau, who is a natural-born sycophant & loves to grovel when they visit Canada.

Betty has lost none of her wooden charms & feigned empathy. But that’s just the way of feudalism. Time to raze it to the ground.

(Photo is screenshot of Betty’s address)