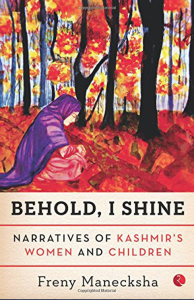 This is the cover of a new book by Freny Manecksha about the Indian occupying army’s use of rape & sexual violence in Kashmir as a form of social control. It is not a matter of troops releasing sexual frustration but an orchestrated political & military tactic to subordinate & demoralize resistance.

Because of the nature of the violation involved in rape & sexual assault, how women, children, & often male (especially in torture) victims are interrogated for their legal defense or interviewed for political campaigns requires sensitivity, respect, & a profound grasp that any shame adheres only to the perpetrators.

Freny worked many years as a journalist for Indian publications, including the Times of India, but now is a freelance journalist focusing in the past few years on Kashmir, particularly women’s experiences under occupation.

It is of course more than apt that the cover art on her book would be by Rollie Mukherjee whose art has also highlighted the narratives of Kashmiri women & honored them for their role & leadership against occupation & as freedom fighters.

This article by Freny is an excerpt from the book titled “How does a Kashmiri woman tell the world her story of rape & sexual violence by security forces?”