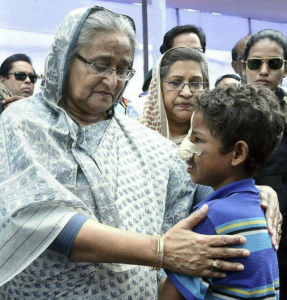 When pressed by an interviewer from France 24, Bangladesh’s Prime Minister Sheikh Hasina refused to characterize the human rights crimes in Burma as ethnic cleansing or genocide but simply repeated that the atrocities were “unacceptable.” There are stronger condemnations for children farting or picking their noses at the dinner table.

Photo is Sheikh Hasina doing her humanitarian schtick with a Rohingya child she will try to forcibly return to a concentration camp in Burma & to another genocidal offensive.