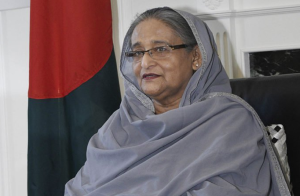 Bangladeshi prime minister Sheikh Hasina was grandstanding again when she told an audience in Washington, DC, “If necessary, we will eat one meal a day to feed the Rohingya.” She & the several millionaires & billionaires making a killing off Bangladeshi sweatshop workers & child labor won’t have to miss a single lavish meal served on gold plates. Instead of empty promises, they can do what they should be doing & mobilize all military & civilian resources to facilitate humanitarian assistance to refugees. They can demand the UN & other nations participate in a massive emergency aid program including providing asylum & they can denounce the Burmese military for genocide in no uncertain terms. When they’re finished with that, they can make a public apology for their vicious, hair-brained proposal to deport thousands of Rohingya refugees to an uninhabitable island subject to monsoons & flooding.