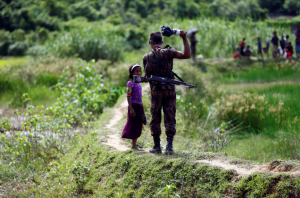 You gotta hand it to Bangladeshi prime minister Sheikh Hasina. She knows how to work a crowd. She’s another adept at public relations–almost as good as Aung San Suu Kyi & Ahmad Hassoun, the hangman mufti of Syria. So while she’s tugging at our heart strings & talking sweet nothings about going without meals to feed Rohingya refugees, Bangladeshi border guards are still aggressively turning back refugees fleeing for their lives. In one area, border guards are assaulting refugees as they disembark from boats, claiming they found drugs in the boats, & paying locals to smash the boats to smithereens with sledgehammers & machetes.

As if that isn’t pernicious enough, the governments of Burma & Bangladesh just announced the formation of a working group to develop repatriation plans for the 500,000 refugees who just fled military & nationalist death squads. If that fails, Bangladesh still hasn’t trashed that monstrous plan to deport Rohingya refugees to an uninhabitable island which is flooded out most of the year.

You can’t trust a government which has created dozens of new millionaires & billionaires off the backs of sweatshop workers & child labor. The political measure of Sheikh Hasina was taken a long time ago by her government’s do-nothing response to the countless fires at sweatshops & particularly the collapse of Rana Plaza in 2013 where workers who lost family or sustained disabling injuries have still not been compensated. It’s beyond dispute that 500,000 refugees in need of food, water, port-au-potties, emergency healthcare, social services would tax the resources of any government. But if Bangladesh is so damn poor, why did Sheikh Hasina offer military troops & assistance to Burma to defeat Rohingya “terrorists” in Arakan state? If she has the resources to deploy an army, she can provide food, shelter, & field hospitals or at least toilets so cholera does not become a health crisis. She has options which do not include deporting refugees back to a death trap or trying to prevent them from asylum. Her government can demand action from the UN & all other countries in providing emergency humanitarian aid. But she’s on the wrong side & no ally to the Rohingya refugees.

Standing with the Rohingya against genocide means not falling for lies & sweet talk in place of action.

Photo is a Bangladeshi border guard bullying a Rohingya child.