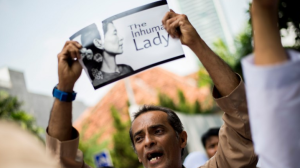 A Burmese government official has announced that Aung San Suu Kyi will not be attending the UN General Assembly meeting later this month. She will be in hiding in Yangon from the tsunami of international outrage over her defense of genocide against the Rohingya people. She could expect Chinese & Russian diplomats to stand with her at the UN but the roar of protesters outside the UN building in NYC would be too much for her to take since she is more accustomed to fawning & adulation as a human rights champion. The genocide she is presiding over blew that delusion.

For some reason, people continue to rebuke Suu Kyi for her silence about the genocide. She has been far from silent going back as far as 2012 when she traveled to pick up her Nobel Peace Prize & a pile of other humanitarian awards. The catalog of her insults & lies about the Rohingya is multi-volumed, including mocking the claims of Rohingya women last year that the military was engaged in mass rapes as a weapon of war.

She is not a powerless figure in Burma even if she does not control the military. She is a partner with the military & paramilitary death squads in genocide.

Stand with the Rohingya against genocide & in their struggle for human, democratic, civil, & refugee rights.

(Photo of Indonesian protester on September 2nd by AFP/BayISMOYO)