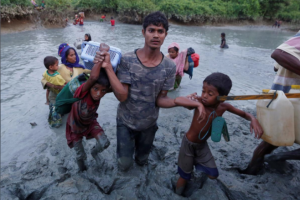 Apparently there are diehards who cling to Aung San Suu Kyi for hope in ending the Rohingya genocide. They are either imbeciles who need to get over their delusions or shysters who thought they had a good thing going with her human rights facade to the fascist military junta that really runs Burma. She’s a monster who has fronted for the junta & now stands exposed as a partner in genocide, not a champion of human rights.

Last week, accompanied by military officials, Suu Kyi traveled by military helicopter to northern Arakan state where the Rohingya genocide is centered. She met with a group of unidentified Muslim religious leaders & in the midst of genocide by military & Buddhist nationalist death squads chided them to ‘live peacefully, not to quarrel with each other, & assured them the government is there to help them’. Reuters, whose reporting on the Rohingya genocide has been particularly loathsome, actually reported this two-bit homiletic by Suu Kyi as though it were news rather than manure.

Reuters has been publishing albums from the Burma-Bangladesh border which bely their reports, including this photo of a young Rohingya man helping children to safely cross the Naf river to Bangladesh.