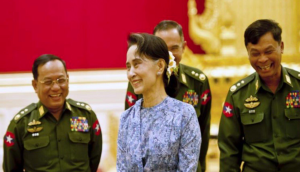 And here you have it! The partnership conducting the genocide against the Rohingya people at Aung San Suu Kyi’s induction March 30th, 2016. When she took office, media reported Suu Kyi finally had real power, that it was the end of military rule, that her moral standing as a champion of human rights was unimpeachable. By January 2017, media was reporting that the genocidal onslaught begun in October which sent up to 90,000 Rohingya fleeing for their lives had “cast a pall” over her regime. Just a “pall” whilst Palestinian & Kashmiri youth throwing rocks are excoriated as terrorists?

In September 2017, she is being denounced around the world but her apologists claim now that she has no real power, that she does not control the military, that she’s got to play it cool because if she criticizes the junta she will lose her post in the civilian government. And in a monstrous switch & bait routine, they are now trying to put the onus for genocide on Saudi-backed Wahhabi Rohingya terrorists & exonerate even the military. It isn’t that such people can’t face reality–this is the apologetics of realpolitik, of defenders of genocide, of the most corrupt & supremacist political forces on the planet.

Stand with the Rohingya people against genocide & in their struggle for full human, democratic, civil, & refugee rights.