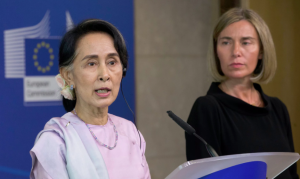 Yesterday, at a press conference in Brussels, Aung San Suu Kyi rejected the UN human rights council fact-finding investigation into allegations of mass rapes, summary executions, torture, genocide by the Myanmar military against Rohingya in Arakan state. “We do not agree with it,” she said.

For anyone with the stomach to examine criminal psychology, Suu Kyi would make an interesting case study. How did a woman who spent almost her entire life living an apolitical, domestic life outside Myanmar morph into the public face of the military junta & of ethnic cleansing Rohingya Muslims? Why has she compromised her, albeit entirely false, reputation as a human rights champion to become the voice of genocide? It isn’t reductionist to point to Suu Kyi’s familial roots in Burmese politics & her place in the class system which runs the military & the country as a place to begin such a stomach-turning analysis.

Whatever Suu Kyi’s psychological & political disorders, Myanmar’s refusal to allow UN monitors into Arakan state should be no deterrent to an investigation of ethnic cleansing of Rohingya Muslims. Since October 2016, over 75,000 Rohingya fled Arakan state for Bangladesh in fear for their lives. They were direct witnesses to the crimes; they are the survivors who watched family & neighbors be beaten, terrorized, executed, disappeared, tortured, raped, & their villages torched. They are a more reliable source of information than Rohingya who remain in Arakan state who would be terrified of reprisals by the military if they even spoke to UN monitors.

Suu Kyi’s phony reputation as a human rights champion is shot to hell. The UN Human Rights council isn’t doing so well either. But we should demand the UN proceed with its investigation by interviewing refugees in Bangladesh.

We should also demand full democratic, human, citizen rights for Rohingya in Myanmar & for Rohingya forced into exile.
Their struggle is our struggle.