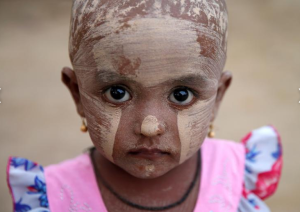 This little girl is a Rohingya living in one of Myanmar’s 36 camps for internally displaced persons in Arakan (Rakhine) state which were set up after the ethnic cleansing assault of 2012. The powder on her face is thanakha powder traditionally used for cosmetic & sun-blocking purposes.

The estimates of Rohingya confined to these camps range from 121,000 to 147,000. An estimated 54-percent of them are children. They are really concentration camps operated very much like Indian reservations in the US prior to the civil rights movement since Rohingya are not allowed to leave & have to live in makeshift shelters with little access to food, education, or healthcare.

After the Kofi Annan dog & pony commission, the Aung San Suu Kyi regime moved to close down the camps as the commission recommended. To show how compromised the Annan commission is with the regime, Annan told the Reuters news agency “It’s really about time they close the camps & allow people, particularly those who have gone through the [citizenship] verification process, access to freedom of movement & all rights of citizenship.” Annan knows full well that Myanmar will not allow Rohingya to even apply for citizenship without renouncing their ethnicity & claiming they are undocumented “Bengali” trespassers.

Thus far, the Suu Kyi regime has closed three of the 36 camps, involving a few hundred families, mostly Kaman Muslims in Rakhine & Buddhists, who were affected by the military onslaught against Rohingya Muslims. They were given small stipends to relocate because as citizens of Myanmar they have freedom of movement & rights to employment & housing. Rohingya Muslims have no such rights & it is excluded that they will be released from the concentration camps to return home. It would also be extremely dangerous for them since Arakan state is under a state of siege by the Myanmar military.