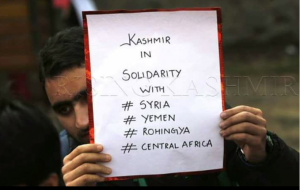 Speaking to media today, Aung San Suu Kyi likened the crisis of Rohingya Muslims to India’s problem with Kashmir. She said there was a need to differentiate between terrorists & innocent civilians & that India was “very well versed” in that since they’ve been tackling it in Kashmir. She’s worth quoting since there’s no mistaking her association of Muslims with terrorism, commonly called Islamophobia:

“You in India will be very well versed in this. Because there is a large Muslim community in India & in places like Kashmir, you had this trouble of sorting out the terrorists from the innocent citizens & all those who are not involved in the terrorist movement at all. So we have the same problem.”

Of course the way both India & Burma do that differentiating of terrorists from civilians is to make no distinction at all between them. That’s why Burma is torching entire villages to the ground & forcing tens of thousands to flee for their lives just to sift out a small band of possibly imaginary guerrillas. That’s why India occupies Kashmir with 700,000 soldiers which is the highest ratio of soldiers to civilians in the world & also why the majority of deaths are civilians, including small children & elderly.

Actually Kashmiris have long been on to the affinities between the Rohingya & Kashmir. Just in the past several days, there have been solidarity rallies against the Rohingya genocide & even during the military crackdown in Kashmir last year, protesters held up signs at more than one rally in solidarity with the Rohingya. It’s just that that Kashmiri terrorist-cum-civilians don’t see the affinities the same way as Modi & Suu Kyi, the terrorists-cum-butchers.

Photo is a Kashmiri medical student at a rally last December whilst the crackdown was still in force. That did not stop him from standing in solidarity with the Rohingya people who were facing a brutal crackdown in Arakan that forced the flight of 89,000 people since October 2016.

We stand in solidarity with Kashmir & with the Rohingya.