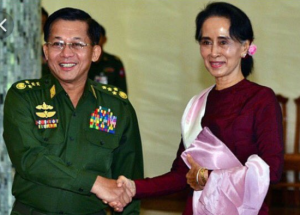 Apparently many, for different reasons, think criticizing Aung San Suu Kyi is pointless. That would be a serious misunderstanding of the political role she plays in Burma, particularly her role in denying genocide against the Rohingya people. Constitutionally, she does not control the Burmese military. The way it was set up in the so-called transition from military to civilian rule is that the junta continues to run Burma behind the scenes while Suu Kyi functions as the front office for the military, as a civilian facade. That way it was possible, without facing opposition from human rights activists, for countries to lift the human rights sanctions imposed after the violent crackdown on the 1988 social uprising when the junta jailed & executed thousands & forced thousands of Burmese dissidents into exile.

The US made a big splash of lifting its sanctions on Burma, including well-publicized trips in 2011 by then secretary of state Hillary Clinton & in 2012 by president Obama. Obama’s trip was during the major genocidal assault in Arakan state sending tens of thousands of Rohingya fleeing for their lives. Meeting with Suu Kyi, like a pilgrimage to the goddess of human rights, was the centerpiece of their trips. The US was lifting the sanctions to get in on the neoliberal investment free-for-all in Burma but also as a way to counter the influence of China which was the leading international patron of Burma during the sanctions, the primary supplier of arms, & already had many joint venture mining & oil exploration projects with the military.

Suu Kyi may function as civilian facade for the junta but she is not merely a decorative piece & it would be misogyny or maybe just misunderstanding to consider her as such. She is an active, committed representative of their political, economic, & military interests. Her primary mission is to use her now tarnished human rights credentials to deny genocide in order to shill for foreign investment. Criticizing her role is part of exposing military rule. As her denial of genocide against the Rohingya people shreds her image as human rights icon, an understanding of what is really going on in Burma emerges & military rule can no longer hide behind her pile of humanitarian awards.

Photo is Suu Kyi with General Min Aung Hlaing, Commander-in-Chief of the Burmese military who has been organizing the genocide of the Rohingya people since 2011.