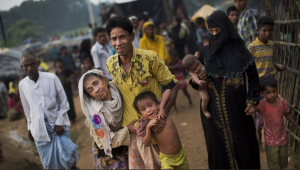 The Burmese junta is hyping up the claim that it’s fighting Muslim jihadists trying to form an Islamic state. This is echoed in the libertarian cesspool called Global Research which published an article today titled “Myanmar: The Rohingya, Saudi Backed ISIS Militants, Aung San Suu Kyi is a US Proxy.” It’s a masterpiece of political sewage which tries to express sympathy (not solidarity) with the Rohingya while agreeing with the junta that the insurgents are Saudi-backed jihadis.

If you want to unravel how they made such a hell of a mess out of understanding Syria, take a look at how Assadists are evolving a line on the genocide against the Rohingya people. It combines the kind of fabrications, conspiracies, libertarian & Stalinist horse manure honed in their apologetics for Assad’s dictatorship.