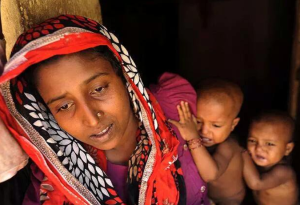 As the Assad cult waxes triumphal about their anticipated victory of counter-revolution in Syria, they turn attention to other countries where they can peddle Islamophobic rubbish about regime change operations & jihadi terrorists. They’re flailing a bit: should they land in Venezuela, the Philippines, Kashmir, or Arakan state? In the midst of genocide, Rohingya Muslims must have seemed ready-made for their monstrous lies. In their deranged calculations, where can they get the best remunerations for their lies, for croaking for their supper after Assad cuts off the checks?

No one wants to deal with these dark corrupt political forces including Islamophobes, anti-Semites, fascists. But we have to defend the Rohingya people & let no lies stand in our way. We have to stop the Assad cult from completely debasing politics & vilifying liberation struggles as “jihadi” terrorism. If we stand together in solidarity to do that, we are part of making this world suitable for human beings to live & love in, including Muslims who are under attack.

(Photo is Rohingya refugee & her children)