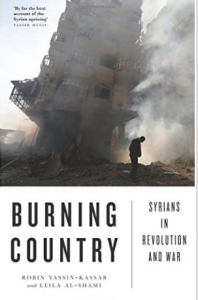 Despite profligacy with the block button, I hate like hell giving up on people, especially if they’re involved in immigration rights or Palestinian solidarity work. But when they won’t be persuaded to look at other sources than Global Research, Mint Press, RT, Pravda, Sputnik News, & the Beavis & Butthead propagandists for Assad, there isn’t much point in wasting your breath.

You know they’ve gone full monty deranged when they talk about the Arab Spring uprisings of millions against dictatorships as orchestrated by the CIA & Mossad; how the world is run by reptilian Jewish bankers; how Assad is the lesser evil to jihadist head-choppers; how the gassing of Khan Shiekhoun was really the White Helmets making a “snuff movie of dead kids”; or when they switch the subject from Khan Sheikhoun 2017 to Fallujah 2004 to deflect from Syrian war crimes to US war crimes rather than denounce Assad, Russia, & the US.

Syria isn’t easy to understand & is intentionally obfuscated to mask the character of US, Russian, & other military intervention. The primary facts are that Syria has formed an unstable & volatile alliance with Russia, the US, Iran, et al, as a counter-revolutionary force to destroy every vestige of revolution against Assad’s dictatorship–just as they are bombing Yemen to destroy the revolution & operating through military dictatorship in Egypt & the Saudis, US, UK in Bahrain to destroy the Arab Spring uprisings–& through Israel to destroy Palestinian self-determination.

It is a Faustian bargain for Assad who needs US & Russian bombers to destroy the revolution but who knows full well that if the revolution is defeated, the US & Russia will turn on him to impose a partition of Syria & he will not end up where he was before the revolution began but will become a minor satrap in a fractious colony starved out by sanctions & besieged by US special forces.

If Assadists think the US is engaged in a proxy head-chopping war against Assad now, they ain’t seen nothing yet. If the revolution is defeated, their days of being embedded up the ass of the Syrian army will be over & they’ll be riding sidecar at a demolition derby.

We cannot allow the Syrian revolution to be defeated without putting up a fight to defend it. The fate of millions hangs in the balance: the fate of Syrians, of democracy in the Middle East & Africa, of Palestinian self-determination, of the Arab uprisings in Egypt, Bahrain, Yemen, of the wars in Afghanistan, Iraq, Yemen, Somalia, Libya, South Sudan, of beleaguered & persecuted Muslims & of the oppressed around the world. That’s how important the Syrian revolution is to all of humanity.

Those confused by a complicated situation can begin by reading
“Burning Country: Syrians in Revolution & War” by Robin Yassin-Kassab & Leila Al-Shami (an eminently readable primer of the revolution), & the blogs of Syrian revolutionist Yassin Al Haj Saleh & Leila Al-Shami.

One needn’t agree with those writers on everything; I take issue with Robin Yassin-Kassab on US intervention & disagree with imposing a No Fly Zone, which I consider an act of war. But his & Al-Shami’s analysis of the Syrian revolution is brilliant & makes Assadist apologetics look like horse manure in comparison.