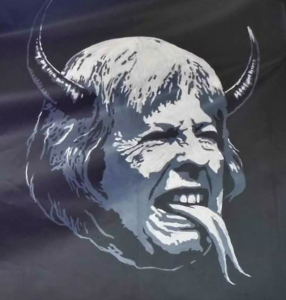 Assad supporters, mourning the Syrian general who got blown up on his way from one humanitarian massacre to the next, have been bombarding my wall for four days. Political methods matter. If harassment of political opponents is part of your repertoire, that says something about the character of your politics. It isn’t an exaggeration to say that is why they support the bombing of civilians in Syria to support the fascist Assad dictatorship.

When I refer to Assadists as fascists, that is not a glib designation or an attempt to up the rhetoric. It’s an accurate political term for the political ideas they espouse. How else could one support all militarism in Syria, except of course US militarism–as if there was a humanitarian form of carpet bombing civilians. Oliver had posts on her walls supporting the Duterte regime, which is conducting death squads against the urban poor & war against Muslims; posts supporting both the Burmese & Thai fascist military dictatorships. They support the genocide of the Rohingya people & call it Wahhabi/Salafi terrorism. They support the Thai military which not only prevents Rohingya refugees from landing but is involved in human trafficking & murdering them & is ruthlessly repressive toward the Thai people.

All bombing of civilians in Syria & elsewhere should be denounced & actively opposed by whichever army: Syria, Russia, the US, Australia, France, the UK, Israel, & all other military forces involved. All foreign intervention should be opposed. But that would allow the Syrian people to carry their revolution against Assad to completion & that is the reason these corrupt & fascist political forces support Russian & Syrian bombing of civilians & misrepresent the counter-revolution against Assad which includes the US.

This photo was posted by an Assadist named Sioux Oliver with the caption “Mary, you look suspiciously like Theresa May.” It’s one of the less offensive of the at least fifty posts I’ve deleted. Demonizing is all you have left if you do not have cogent arguments to defend fascism.