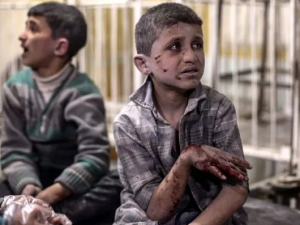 If there’s one thing Assadism has popularized in politics, it’s equivocation: lost souls who feel torn between dictatorship & head-choppers. Lost souls but not malignant, they just don’t want to lose their friends who support dictatorship & carpet bombing so they try to play both sides of the street. See how that can create confusion?

Equivocation isn’t the same as saying honestly “Syria’s kinda complicated. I don’t get it & don’t have the time to study it.” Equivocation is a case of not knowing your ass from your elbow because you haven’t given serious study to the issue but still want to look smart or it’s cowardice & fear of being shoved off the bandwagon.

Equivocation is more curable if you recognize the Syrian revolution which Assadists all deny ever happened; if you follow Syrian citizen journalists reporting from civilian bombing zones; if you read sources other than Russian & Syrian propaganda.

The only thing that makes equivocationitis incurable is allowing fear of being isolated & vilified to control your politics. That’s a big one, a whopper of a fear. But put it in perspective by imagining how it feels to be a working person in Syria, part of the revolution against Assad’s dictatorship, vilified as head-choppers, denounced as “Wahhabi/Salafi whack-jobs,” getting bombed & gassed with no antiwar response & more concern for empty airport hangars, watching your loved ones & neighbors bombed to death, being isolated for years under barbarous military siege without an international groundswell of outrage & opposition.

If after putting it in perspective you still can’t cure equivocationitis, some suggest calling 911. My suggestion is to stuff a sock in it & own up to being an Assadist.

Photo is children being treated in a field hospital in Douma, Syria for injuries sustained in a Syrian airstrike on April 4, 2017. Talk to them about your angst.