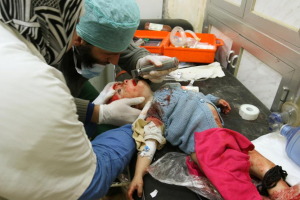 Ordinarily I don’t post gruesome photos, especially of children. But the cavalier attitude of Assad supporters & of those who support Russian & Syrian bombing of civilians in Aleppo & other cities must be countered with the harsh & ugly realities. This small child is being treated by medics at a field hospital in Aleppo, Syria after Russian airstrikes today.

People like Max Blumenthal, Tim Anderson, & Vanessa Beeley are establishing their authority among confused & libertarian people by vilifying rescue workers in Syria but much more reprehensibly by mocking the children of Syria who are suffering the unspeakable as a result of Syrian & Russian bombing.

It’s so politically peculiar, if not completely unsavory, to attempt to discredit child victims of war. But in fact that derangement has deep psychic roots in right-wing politics. When you ridicule little Omran as a hoax, as a two-bit ham actor & son of a rescue worker associated with “throat-cutting jihadists,” you come perilously close to the racist caricatures of Black infants & children prior to the US civil rights movement. You also have to explain how ridiculing child victims of war differs from how occupying armies target children, particularly Palestinians & Kashmiris. Of course ridicule isn’t the same as bombing or disabling children but when you use it to justify bombing you place yourself in politics on the side of the barbarians. In this day & age, that’s too close to fascism for comfort.

Children are not fair game in war, occupation, genocide—nor in propaganda & justifications for them. I don’t wish to advise or improve the war propaganda of Assad supporters but to discredit & shame it with the reality of children’s lives under Syrian & Russian bombing.

This is one of Vanessa Beeley’s unsavory, puerile attacks on baby Omran: 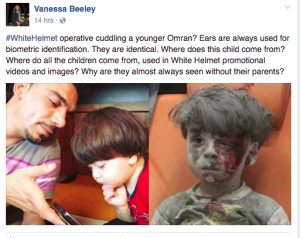