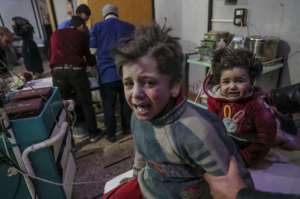 Assad propagandists, including his stable of fascists like Bartlett & Beeley, & fellow travelers & hacks like Patrick Cockburn & Jeff Mackler, are managing to write about military events in Eastern Ghouta without mentioning that 400,000 civilians are under carpet aerial bombardment. There are hundreds of videos & photos pouring out of the area documenting the undeniable. But they go all geopolitical or talk about “head-chopping jihadis” at the gates of Damascus.

Just asking for some friends–these little kids getting treated at hospital in Eastern Ghouta: are these the “head-chopping jihadis” that the Assad regime is afraid of? Is that why he’s bombing Eastern Ghouta to smithereens?

Stand with the Syrian people & demand the immediate cessation of Syrian, Russian, & US coalition bombing of Syria & the immediate, unconditional withdrawal of all foreign military forces from Syria.