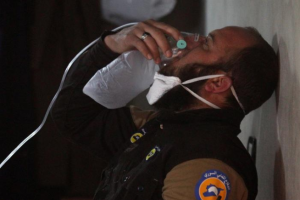 The Syrian government carried out a chemical attack today, either sarin or chlorine gas, on the town of Khan Sheikhoun, near Idlib. This is a White Helmet rescue worker overcome with the fumes & breathing through an oxygen mask. Many, including children, have died. Assadists will ignore the chemical attack to go with counter-revolutionary vengeance after those risking their own lives to save civilians.

Assadists feign outrage over US bombing of Mosul but their indifference to human life is exposed in Syria where they simply deny Syrian & Russian bombing of civilians & instead turn their venom on the rescue workers trying to save people.

Assadist apologetics for war crimes won’t carry the cache of horse manure when the international antiwar movement is rebuilt to demand:

–Stop the bombing of civilians in Syria & Iraq!

–All foreign military forces out of Syria & Iraq!
(Photo by Ammar Abdullah/Reuters)