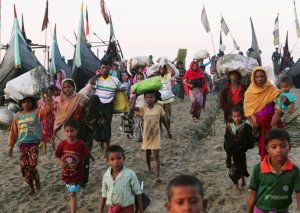 Twenty-one heads of government will be meeting in the Philippines from November 11th for the Association of Southeast Asian Nations (ASEAN) summit hosted by president Rodrigo Duterte. ASEAN is basically a free trade/sweatshop economics alliance. The ten member nations of ASEAN, including Burma, will meet with officials from Australia, Canada, China, the EU, India, Japan, New Zealand, South Korea, Russia & the US.

The public agenda includes panels on medical technology, standardized printing, quality control methods, art & musical events, galas celebrating the 50th anniversary of ASEAN, & panel discussions of the ASEAN human rights declaration adopted in 2012 (AICHR). The AICHR declaration is a lovely 11-page document full of high-flown sentiments to lay out the framework for human rights in the ten member nations but it has never acquired more value than toilet paper since Burma signed it while engaged in genocide against the Rohingya people & while the army was accused of using child soldiers, engaging in mass rape & scorched earth methods against other ethnic groups in a country that is a prison house of nations. What does this statement of AICHR principles mean to the fascist Burmese junta & Aung San Suu Kyi or for the Rohingya people:

“Every person is entitled to the rights & freedoms set forth without distinction of any kind, such as race, gender, age, language, religion, political or other opinion, national or social origin, economic status, birth, disability, or other status.

This AICHR human rights declaration will be lauded & reconfirmed at this ASEAN summit hosted by Duterte while he is engaged in a death squad war against the urban poor & a military offensive against Muslims; while Burma is involved in genocide; while Thailand is run by a repressive military junta; while human rights are a major issue in every other member nation; while the US is involved in several wars; while Russia, India & China are providing arms to Burma for genocide; while Russia is involved in carpet bombing civilians in Syria; while India is occupying Kashmir. The declaration is nothing more than window-dressing signifying nothing in terms of child labor, human trafficking, drug trafficking, militarism, occupation, democratic rights to dissent, political corruption, extrajudicial killings, refugee rights, religious freedom, genocide. It’s a mockery of human rights for Suu Kyi & Duterte & all the other shysters gathered at the ASEAN summit to wax poetic in a time of death squads, occupation, & genocide.

The photo is Rohingya refugees arriving by boat in flight from genocide in Burma. If the genocide against them is not on the agenda at the ASEAN summit, there’s no human rights there-there to that summit.