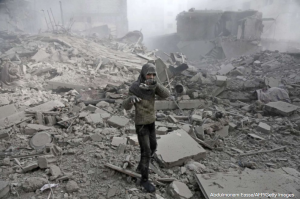 Many Assad supporters are becoming quite open, even reckless, about their anti-Semitism. They have never tried to conceal their Islamophobia since it plays so well to their constituency. Their leading Irish voice is Gearóid Ó Colmáin, an amoral, demented, & unapologetic fascist who supports the Rohingya genocide & is endorsed by fascists Eva Bartlett & Vanessa Beeley as an authority on that genocide. Curious they claim that since he’s never been to Arakan state in Burma & their only credentials for expertise on Syria is that they’ve spent several weeks there over the course of three years always embedded up the ass of the Syrian army, like all propagandists travel in war zones.

Colmáin knows who he’s croaking to & frequently posts hateful things about Jews, as well as the Rohngya who he calls “Bengalis” as the fascist Burmese junta insists. This is his latest about Jews: “You can never please them. Neurosis IS the Jewish condition, which is why it is a pathology and not a religion.”

Those I call “reluctant Assadists”–i.e., those who say Syria is too complicated to understand so they defer to fascist propagandists, deny the popular revolution entirely, & support Assad’s dictatorship claiming it’s better than the head-choppers–have to ask themselves where they stand on association with political forces like Colmáin, Bartlett, & Beeley. Are they comfortable collaborating with fascist forces? Do they still kid themselves that you can call yourself progressive when your politics are rooted in hating on Jews, Muslims, & now the Rohingya; when you associate the Rohingya & Kashmiri freedom struggles with “Wahhabi/Salafi jihadists”; & when you herald Syrian & Russian bombers as emancipatory forces?

This surreal image from January 9th, 2018 is a young girl emerging from the rubble after Russian bombing of civilians in eastern Ghouta under the guise of clearing out mercenaries & terrorists. Is this how reluctant Assadists see social transformation to a free society? Or have reluctant Assadists taken their politics to their natural conclusion & become the foot soldiers of a new national socialism?