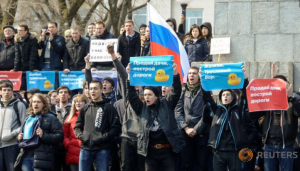 Protests are going on today in several cities across Russia to protest corruption & demand the resignation of Prime Minister Dmitry Medvedev. Opposition leader Alexei Navalny called the protests over allegations that Medvedev had amassed an immense fortune that outstripped his official salary.

Dozens are being arrested because the Putin regime calls the protests “unsanctioned.” In 2014, Putin signed a law criminalizing repeated protests. Those found guilty of ““holding meetings, rallies, demonstrations, marches & pickets” multiple times during a 6-month period are eligible for penalties up to 1 million rubles (($28,540) or two years of salary & up to five years of forced labor or prison.

In 2016, Putin formed a National Guard with the right to fire into crowds with live ammunition. This would suggest Putin & his Kremlin cabal expect dissidence & intend to repress it.
Already today dozens of protesters have been arrested In Vladivostok, Moscow, & elsewhere, but reports are incomplete. The Moscow rally is surrounded by thousands of riot police, paddy wagons are in the wings, & surveillance helicopters are circling overhead.

Our fullest solidarity with the protesters. We hope some of them will raise banners demanding the immediate, unconditional withdrawal of Russian troops & bombers from Syria.

(Photo of anti-corruption protest in Vladivostok, March 26, 2017 by Yuri Maltsev)