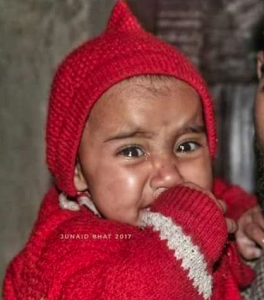 This is the infant child of 25-year-old Mysara Banu, a Kashmiri woman killed in an Indian army hunt to kill operation. The occupying army was conducting the operation at 12:30 in the morning based on a tip from an informant/snitch that three militants were hiding in the area where she lived. What could go wrong with that?
Some reports claim Mysara was killed in crossfire as she tried to flee the area with other civilians. Other reports say she was in the home where the militants were hiding. None of the reports agree on anything that happened which might suggest Indian army officials are lying. But it’s also entirely possible they have no idea what happened when they started shooting off bullets into a home in the dark just after midnight based on what some lowlife told them.

This infant is now left motherless. That’s the consequence of criminally reckless behavior under military occupation where soldiers are not held responsible & are in fact rewarded for every dead body they produce. This little girl will have hell to pay. Kashmiri residents of the district are protesting in response to the criminal misconduct of the occupying army, most of whom were special forces trained by Israel.

Sincere condolences to the family & friends of Mysara Banu. May she Rest In Peace.