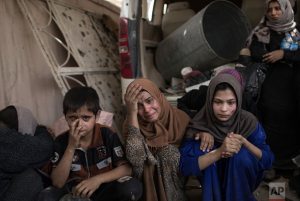 There’s a lot of jubilation over on Twitter about what they’re calling the “liberation of Mosul” from ISIS by US-coalition bombers using white phosphorous & Iraqi special forces using rockets & mortars. Louisa Loveluck, the Washington Post reporter, tweeted that Iraqi special forces lost 40% of their men in the siege; Daniel Wickham, who writes about human rights & opposition movements, tweeted in return that Iraqi forces deserve gratitude for clearing out ISIS.

The jubilation is indistinguishable from & just as grotesque as Assadist ecstasy about the fall of Aleppo to the Syrian army. They must have forgotten to thank US-coalition bombers & praise the use of white phosphorous for being so effective in clearing out ISIS. Or would that have seemed over the top? The jubilant reporters didn’t say where the families of the 10,000 Mosul civilians killed & the nearly one-million civilians forced to flee should send their messages of gratitude for liberation by Iraqi mortars & US bombers.

What’s most repugnant is that Loveluck also tweeted from Mosul: “Mosul’s Old City is devastated. Stench of bodies fills air in bursts as you walk, arm of what must have been a child hangs from the ruins.” Is that what liberation looks & smells like to her? Mosul is an apocalypse, not a liberation. You don’t fight ISIS by bombing a city where they’re holed up with a million civilians who are elderly, disabled, infirm, pregnant, or with children like the one whose arm was hanging in the ruins. You fight ISIS by cutting the weapons supply routes, by stopping the US Pentagon & other countries from supplying them with weapons. How did ISIS last for nine months in Mosul when it was besieged by land & air by over 60 armies?

ISIS has not been defeated in Iraq or Syria. Nor have all the other terrorist groups. They will not be decisively defeated until the countries supplying them with weapons & those bombing civilians under the guise of fighting ISIS & Al-Qaeda are forced to withdraw unconditionally. What is going on in Iraq & Syria is counter-revolution, not liberation. There is no militarism on earth capable of emancipation from terrorism or dictatorship. Those who believe US militarism is part of the freedom struggle against terrorism share the contemptible vision of Assadists who see Syrian & Russian bombers as freedom fighters.

The jubilation of western reporters is not shared by these civilians from Mosul who were forced to flee the city into refugee camps without sufficient tents, food, medical care, sanitation.

The only principled demands are for the immediate, unconditional withdrawal of all US, Russian, Iranian, Hezbollah, & other military forces from Iraq & Syria.