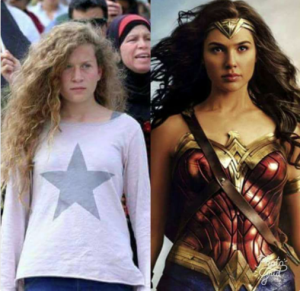 On the right, Gal Gadot, the Israeli actress who played the comic book patriarchal version of Wonder Woman, who accused Palestinians in Gaza of using women & children as human shields against Israeli bombers, & who celebrates the occupation & slaughter of Palestinians.