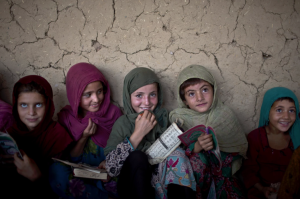 These little kids are Afghan refugees in Islamabad, Pakistan. Although media has an almost complete news blackout on the war in Afghanistan, we do know that civilians continue to be bombed & continue to die, including children. War reporting is so paltry that they don’t even have journalists of the embedded kind whose souls are mortgaged to the military & parrot what the military tells them. It’s likely a media policy, in league with the US government, to blunt active public opposition to the war.

But as the 16th anniversary of the Afghan war approaches in October, we should keep in mind that it is children just like these, including refugees & those unable to flee Afghanistan, who suffer most from the war. It is our historic obligation to render solidarity to them.

US out of Afghanistan.

(Photo from 2014 by Muhammed Muheisen)